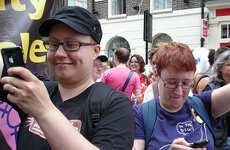 LONDONERS who walk and ride bikes instead of using carbon-guzzling transport are to get cash rewards thanks to a new iPhone app.

The app, called re:route, simply requires downloading before you tap in your intended destination and when you get to other end, you get points that can be redeemed in a variety of shops including Marks & Spencer and Cineworld.

What with the expected over-crowding on the roads, buses and the Tube this summer due to the London Olympics, Transport for London has given its backing to the scheme.

“TfL is supporting re:route because it supports our wider efforts to encourage more people to consider cycling and walking,” said TfL’s Ben Plowden.

“We’re particularly excited about the potential for this app to motivate people to cycle and walk during the London 2012 Games, when London’s roads and public transport network will be at their busiest.”

Re-route members get 75 points as soon as they join, which equates to £5 at M&S, and then about 5 points per journey, so 30 journeys would get you a tenner in spending money.

As yet, the re:route app is only available on the iPhone, but there are plans to introduce an Android version soon.

Boris Johnson: I Was ‘Hacked Off’, Met Chief Had to Go