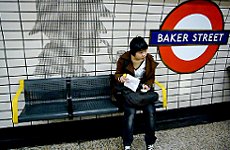 BOOK covers related to the streets of London you’re walking down pop up on the screen of your iPhone, in a just released app called Get London Reading.

“Hold up your iPhone on any London street and a floating book cover will appear of any novels that are based in, or mention the area you are in,” said a spokesperson for KentLyons, the graphic design agency behind the app.

“For instance, if you are standing on Baker Street, any number of Arthur Conan Doyles’ Sherlock Holmes titles will appear on the street view.”

It could be said that it’s hard enough to take in what the streets already have to offer, but there are going to be plenty more of these ‘augmented reality’ apps and at least this one has a noble aim.

“We love the possibilities of augmented reality being used to encourage ‘old-fashioned’ reading – new technology being used to highlight the simplicity of reading a book,” Noel Lyons of KentLyons told digitalartsonline.co.uk.

The thing about books set in London is that there are loads of them and so far only 500 are in the Get London Reading database, though more will be added.

“What lets it down is the lack of content,” reads one customer review.

“How about Celine’s adventures in Wapping and London Bridge in Guignol’s Band or Conrad’s The Secret Agent in Greenwich and Soho or The Picture of Dorian Gray for goodness sake?”

Boris Johnson Backs Away from WiFi for London Underground