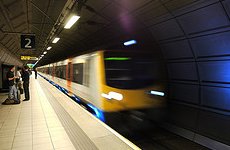 HEATHROW airport could soon get a direct rail link to south-west London after local councils lined up to back a Waterloo-Terminal 5 scheme known as Airtrack Lite.

First raised by Wandsworth Council a couple of years ago, the scheme has recently been revised – hence the ‘lite’ in the name- to avoid problematic level crossings and has now won the support of two other London boroughs, Hounslow and Hammersmith & Fulham.

Mostly using existing track – plus a new station at Staines – Airtrack Lite would run at least four trains an hour from Waterloo to London’s main airport, calling at Clapham Junction on the way.

The idea is that the new route would cut journey times for south Londoners who currently have to traipse up to Paddington to catch the Heathrow Express, or go into town before switching to the Piccadilly Line.

The next step is for Airtrack Lite to win the support of Department of Transport, which appears ready to include the scheme in its long-term plans.

“Heathrow needs to be at centre of a genuine local rail network offering easy access to communities on all sides of the airport,” said Ravi Govindia, leader of Wandsworth Council.

“Our scheme would provide an alternative to tortuous journeys on the Piccadilly Line and help get more cars off the road.”

Meanwhile, train travellers can now keep track on annoying delays thanks to a new phone app called mynet travel, which provides real-time information by the power of social networking.