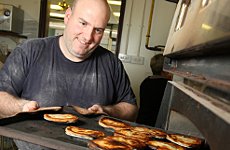 WITH ALL THE HOO-HA about today’s announcement that West Ham FC have been chosen as the preferred tenant for the 2012 Olympics stadium, it’s easy to forget that London’s East End has much more to offer than an IOC legacy.

A new campaign run by the Docklands Light Railway was set up to discover the area’s hidden gems. Top of the list was ‘Maureen’s Pie & Mash‘ in Poplar which according to one contributor is “a real piece of East End history and a true gem.”

Pie and Mash takes its place alongside Jellied Eels an Salt Beef as traditional cockney fare and Maureen’s has long been cited as an ideal place to dicover the dish’s charms.

Chef and son of original owner Maureen, Jason Patterson (pictured) says “It’s been a pleasure to serve traditional pie and mash to the East End community for the last half a century and we hope we can continue for many years to come.”

Painted Hall Greenwich
The Painted Hall, one of the finest dining halls in the Western world, is decorated with stunning paintings by James Thornhill, and is part of the King William Court.

Departure
Departure is an arts centre, bookshop and café and is part of a large Christian charity devoted to serving many different communities in London. The café is located near to Limehouse station and was praised as having great homemade food. One east London visitor praised the café as “a lovely place to catch up with friends, read a book, work on laptops (free wifi) or do some art or sewing”. There are also occasional film screenings.

Mudchute Park & Farm
This park and farm is the largest city farm in London full of animals to interact with, and has been recommended as a great place to take kids. The cafe/restaurant has also been commended for being very family friendly and serving healthy, tasty meals and snacks.

WH Wellbeloved
WH Wellbeloved has been praised as “possibly the best butcher in London”, and is only a short stroll from Deptford Bridge DLR. A Londoner commented that “his magnificent t-bone steaks are often cheaper per kilo than the supermarkets, he happily orders in all sorts of game, his sausages are superb, and the baked-on-the-premises pies are to die for!”

Thames Barrier Park
The park has been recommended for the 120 species of wildflower. This green space near Pontoon Dock station really stands out in the area and features in-built green sculptures as well as a ‘fountain plaza’ where 32 jets spring from the ground – perfect for jumping and splashing around in on a hot day!

Fatboy’s Diner
This classic American Diner with a retro ambiance has been recommended as a “joy to visit”. The diner has a traditional calorific American menu and serves simple food of a high standard. Fatboy’s is located on Trinity Buoy Wharf, a regular location for photographers and film-makers. It’s a 10 minute walk from East India Station, hidden down a side road you might ordinarily miss, unless, of course, you’re in the know.

Greenwich Market
Greenwich market has been recommended for a having a great variety of independent stalls selling unique hand-made goods. With a variety of traders, there’s likely to be something here to suit all tastes. The cobbled street and friendly traders bring about a fantastic atmosphere and the market is just a short stroll from Cutty Sark DLR station.