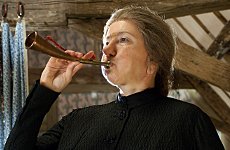 NANNY McPHEE and the Big Bang is to get a London-wide world premiere next month involving 15 cinemas across the city from Feltham to Romford.

It is hoped that several of the cast, which includes Emma Thompson (both star and writer of the film), Bill Bailey, Rhys Ifans, Maggie Gyllenhall and Maggie Smith, may take part in the people’s premiere, the highlight of 21 March’s London Film Day too.

“Nanny McPhee is very much a film for and by Londoners and we’re proud to have it as the centrepiece of the first ever London Film Day,” said Adrian Wootton of Film London.

As an extra bonus, tickets prices for the premieres are to slashed and there will be free Nanny McPhee-based events at the participating cinemas.

“We want to bring the excitement of a world premiere to local cinemas in boroughs throughout the capital,” said Boris Johnson.

“London Film Day is the perfect opportunity to experience first-hand the excitement of a premiere and see some stars at your local cinema.”