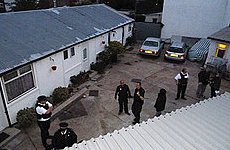 METROPOLITAN POLICE officers have raided 100 homes across London this morning in the on-going response to last summer’s riots.

Arrests made today will be added to the 3,400 people already taken in by the police.

“Today’s activity is an indication that four months on from the incidents, we remain absolutely committed to identifying and arresting those responsible for the disorder,” said Detective Superintendent Robin Bhairam.

“My message to those who were involved in criminality is that you will not get away with it. We have a huge team of dedicated officers working on this investigation and we will find you.”

Today’s raids and the associated tough talk from the Met come against the backdrop of yesterday’s Her Majesty’s Inspectorate of Constabulary report on the riots that talked up the use of live bullets as a method of crowd control, as well as plastic bullets and water cannon.

The Met was criticised earlier this month by the Police Federation for its “directionless” immediate response to the riots and the London force’s own interim report conceded mistakes were made.

(NB Photo not of today’s raids.)