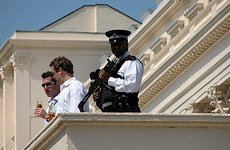 THE METROPOLITAN POLICE says it has officers ready to fire plastic bullets on students marching against education cuts in London tomorrow (Wednesday 9 November).

A spokesperson for the Met confirmed that it had “the authority to deploy baton rounds” if trouble reaches a certain point.

“It would be negligent if we did not plan a response to the small minority who may be intent on disruption and may not intend to be peaceful,” said the Met’s Commander Simon Pountain.

Last year, police were criticised for what some felt was a slow and laid back response to student activists who smashed shop windows and stormed the headquarters of the ruling Tory party and this summer, similar criticisms were made regarding police tactics during the riots.

It was directly after the riots that Home Secretary Theresa May threatened future offenders with plastic bullets.

Nevertheless, the use of plastic bullets remains a controversial tactic.

“The prospect of the police shooting at unarmed demonstrators with any kind of bullet is frankly appalling, un-British* and reminiscent of scenes currently being used by murderous dictatorships in the Middle East,” said Jenny Jones, Green Party candidate for London Mayor.

“Any officer that shoots a student with a baton round will have to answer to the whole of London.”

* In fact, far from being “un-British”, plastic bullets were developed by the British security forces for use in the north of Ireland.

Lily Allen ‘Thrilled to be Pregnant’