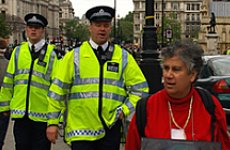 LONDON’S police officers should walk the beat on their own, not in pairs, says the new Commissioner of the Metropolitan Police.

“The public, politicians, police authority, everybody you speak to, cannot understand why police officers don’t patrol on their own any more, and on occasions neither do I,” Stephenson told a meeting of his fellow police men and women yesterday.

Walking in pairs has been Met policy for a couple of decades, but Stephenson wants the public to see beat officers doing their rounds more often and splitting up teams of two is one way of doing that more efficiently.

“As far as patrolling is concerned the default position should be single patrols,” said Stephenson, who took over as Met Chief in January.

“Instead of talking to each other I want them to look at people and talk to people. I want the public to feel that the cop owns the street on their behalf.”

While the public may feel safer with a more regular police presence, the men and women that have to do the job don’t seem so keen on the single patrol idea.

“I think our members will be a bit concerned about the safety aspect of it,” said Peter Smyth of the Metropolitan Police Federation, which represents ordinary officers.

“Quite clearly they feel safer in pairs, particularly on night duty and in particular areas.”