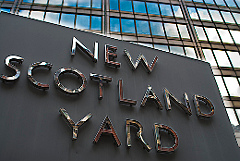 NEW MET Police Chief Bernard Hogan-Howe has admitted that the force’s relationship with the media “has gone too far”.

Hogan-Howe said he would bring in new measures to stop officers taking money from journalists in return for information, a practice that has been highlighted by the News International scandal.

One police officer in the firing line for cosying up to the media is Sir Paul Stephenson, Hogan-Howe’s predecessor, who, it was revealed today, had regular lunches paid for by not just News International papers like the Sun and the News of the World, but also the Daily Telegraph and the Daily Mail.

“There’s no such thing as a free lunch, and for a police officer to be in someone’s debt is a dangerous thing,” said Jenny Jones, a London Assembly member for the Green Party.

“It happens at all levels, and at all levels corruption is possible.”
The new revelations about Stephenson come from the publication of gifts and hospitality received by top Met police officers over the last three years.
More openness on gifts “won’t only make things easier to track, but it will help police officers understand what the rules are,” said Jones.

London Olympics Football to be Named by a Fan