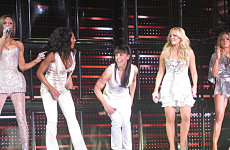 Former Spice Girl Melanie Chisholm has revealed she is pregnant. Mel, 34, is expecting her first baby with partner of six years, Thomas Starr.

She is the last of the five Spice Girls to have a baby. Mel – also known as Mel C and Sporty Spice – revealed yesterday (21.08.08) she is “delighted” by the news.

The other members of the girl band – Geri Halliwell, Victoria Beckham, Emma Bunton and Melanie Brown – have said they are delighted for their friend.

A source close to the star told the Daily Mirror: “Melanie is over the moon at the prospect of becoming a mother for the first time. The girls are so pleased for her and have said they’re only a phone call away to pass on any parenting tips.

“Melanie loved being around their kids on the band’s recent tour and is delighted she’s now one of the gang.”

Rumours Mel was pregnant were sparked when she was spotted in a floaty dress with what looked like a baby bump in Liverpool last Friday (15.08.08). One onlooker described her as looking “absolutely radiant” at the time.

When Mel has her child it will be the eighth baby born to the Spice Girls. Geri has a two-year-old daughter, Bluebell, while Victoria has three sons, Brooklyn, nine, Romeo, five, and Cruz, three. Mel B has two girls, Phoenix Chi, nine, and Angel Iris, 16 months, while Emma has a son, Beau Lee.

Met Boy Racers Given a ‘Speaking To’