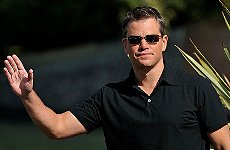 MATT DAMON got a closed London branch of Pizza Express to open up and cook him an American Hot, by offering staff a kiss.

Currently on our screens in the rugby film Invictus, the hot American is also on our streets, filming his next movie, Hereafter, a supernatural thriller directed by Clint Eastwood.

Eastwood had arranged for local shops and eateries in and around Leadenhall Market to shut for the day so filming could go ahead uninterrupted.

But Damon and his empty stomach had other ideas. He bribed Pizza Express staff with kisses and photos and soon enough his teeth were sinking into pepperonis and jalepenos.

“He was outrageous and wouldn’t take no for an answer,” a witness told the Daily Star.

“He’d been filming since 7.30am and was starving.”

Prince Harry tipped to propose to Cressida at Christmas