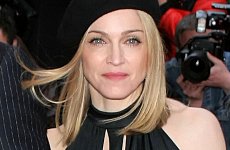 MADONNA is to follow her adoption of a child from Malawi by finding a neglected south London baby to call her own.

Moved by the plight of knife-crime orphans, The Material Girl wants to offer an escape route and loving home to at least one child whose parents have been stabbed brutally to death.

“She’s been here before,” said a source.

“Bringing up a Developing World kid has prepared her for this.”

But, as with the adoption of David Banda in 2008, Madonna faces bureaucratic hurdles before she can bring hope to the life of her chosen tragic child.

“She will need to show them [adoption agencies] a plan under which the child keeps in touch with its south London roots,” added the source.

Nevertheless, Madonna’s new family member should be safely north of the Thames in good time for the London Olympics, one of the stipulations laid down by the singer’s legal team.

It is understood Madonna plans to call the baby Olympic Gold Ciccione, girl or boy.

Madge is keen to highlight the lack of Olympic contact available for children south of the river, an area ignored by London 2012 chiefs.

For example, this week, four parks were chosen as venues for thousands of fans to watch the Games on giant TV screens. All four are in north London.

“It is no surprise vulnerable kids turn to knife crime when sport turns its back on them,” said a source.

Madonna is not a regular visitor to south London, but once shot a gritty video in a deserted warehouse in Mitcham.

It was there the 4 Minutes singer was first made aware of the area’s knife crime problem, as next door The Bill cast was filming another episode about street gangs.

“When ITV decided to axe The Bill, that was it, Madonna knew she had to act,” said the source.

In conjunction with the South London Adoption Agency, Madonna now plans to convert the warehouse into an orphanage, opening date 1 April 2012.