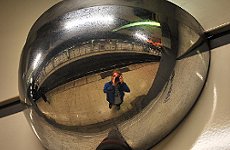 GOVERNMENT transport plans for London, unveiled yesterday, have been slammed as “smoke and mirrors” since most of them won’t be ready for the best part of a decade.

London looked to have emerged relatively unscathed from the axe when the government published its slimmed-down programme, with both the Thameslink upgrade and electrification of some suburban routes given the go-ahead.

But transport campaigners have been quick to point out that the improvements will only come years after fares have been whacked up. Thameslink, for instance, won’t now be upgraded until 2018 at the earliest, years later than originally planned and well after another general election which could mean further changes to the schedule.

“Inflation-busting fare increases kick in within weeks, while the infrastructure and upgrade works we need to drag the UK’s railways out of the slow lane are light years away,” said Bob Crowe of the Rail, Maritime and Transport union.

“We are disappointed that passengers will have to endure severe disruption for a further three years, especially at a time when passengers are suffering huge fare rises,” said TravelWatch’s Jo deBank.

“This delay means it is not so much jam tomorrow, as jam the day after tomorrow.”

Death Clock to Loom Over City of London

Duchess Kate to Sleep Rough on the Streets