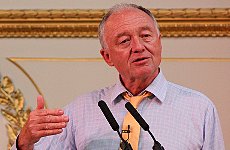 KEN LIVINGSTONE scored well ahead of Boris Johnson in a ‘Twitter Jury’ poll that followed the first live broadcast debate between the main candidates for London Mayor, held on LBC radio this morning.

While Labour’s Livingstone claimed the Twitter votes of 24% of respondents, Tory Johnson could manage only 16%. Brian Paddick, the Liberal Democrat hope, also scored 24%, while the Green Party’s Jenny Jones came in at 8%.

Before a very late surge for Paddick, the two main contenders, Johnson and Livingstone, ran neck and neck at 24% apiece throughout the hour long debate, more or less in line with previous polling evidence.

Despite Paddick’s party being in a national coalition with Johnson’s Tories, the Liberal Democrat candidate lined up with Jones and Livingstone to portray Johnson as a do-nothing mayor more interested in “vanity projects” than sorting out London’s problems.

In one exchange about how the mayor might find money to fund transport fare cuts, Livingstone said:

“Don’t do vanity projects like the cable car and the bus,” a reference to the £40 million cable car between Greenwich and the Royal Docks and the new buses Johnson is bringing in that cost £1.4 million each, nearly five times the price of a normal double decker.

Johnson also came under fire for his slack response to the riots last summer, when he had to be persuaded by Tory high command to come home from holiday in Canada and for not sorting out a deal for transport staff Olympic bonuses.

“Why did you leave it until now?” asked Livingstone.

The London Mayoral election takes place on 3 May.

Paul McCartney Simply Having a Wonderful Christmas Time at the O2