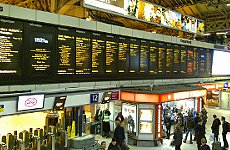 LONDON commuters should join a new campaign against the huge rail fare rises that have come in this week, says a leading transport group.

On a mission to get signatures for a petition against the 6-13% ticket price hikes, Campaign for Better Transport people, mocked up as David Cameron and Nick Clegg, were at Charing Cross station this morning.

“Commuters feel like they are being pick-pocketed by the Government, expected to pay more year on year for the same poor quality service,” said the CBT’s Stephen Jopseph.

“The Government pledged to create fair fares and we all expect them to keep that promise.”

Together with the simultaneous rise in VAT to 20%, it is estimated commuters to London from outlying counties face a £1,000 hit to their pockets this year compared to last.

Broadcaster Michael Palin, a CBT supporter, spoke for many when he accused the rail companies of “holding travellers to ransom”.