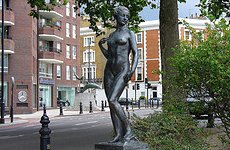 LONDON is about to undergo a “staggering” £35bn investment at the high end of the property market, with a 70% increase in planned projects, according to a new survey.

While much of the country and even much of London’s own suburbia face years of falling or stagnant house prices, costs in London’s prime-property areas are expected to race ahead, hence the attraction for investors.

Chelsea and Fulham are set to grab 25% of the 15,000 new prime properties – defined as the top 5% by price – planned for London over the next ten years, while other areas singled out by consultancy EC Harris include the South Bank (prospective home to 17% of the new-builds) and the City (12%).

“The sheer size of the [planned investment] based on current sentiment is staggering.”

To illustrate the point, EC Harris has worked out that when combined, the planned upscale projects would cover 2.5 square kilometres, or about the size of the whole Olympic Park.

“It doesn’t matter where you are in the world; as soon as someone becomes successful, getting a second home in London is always near the top of the list of things to do,” Tony Pidgley, of Berkeley Group, London’s largest property developer by volume, told the Financial Times.