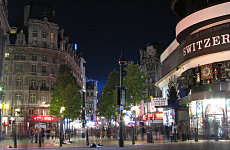 THE NUMBER of tourists coming to London and the UK has dropped sharply this summer according to new figures.

The Office for National Statistics released figures yesterday (Thursday 15 August 2008) showing that there were five per cent less visits by overseas residents in the three months to June than the previous quarter, seasonally adjusted. Visits were three per cent down compared to the same period last year (April-June 2007).

As expected, tourists from North America saw the largest drop. The eight per cent fall comes after twelve months of a sliding dollar and general economic slowdown across the pond.

More surprisingly, visits from eurozone citizens also fell, by a slightly more modest six per cent. Many industry insiders had expected euro area visitors to make up for the US drop thanks to the strength of their currency. But figures published yesterday by Eurostat, the European Union’s official statistics office, showed that the eurozone saw GDP fall by 0.2% in the second quarter.

A collective tightening of belts across leading economies is thus putting the squeeze on the British tourist industry. London is more vulnerable from this pressure as its tourist trade relies more heavily on foreign visitors than other leading destinations in the UK. Indeed many coastal towns are enjoying a good summer season as cash-strapped Brits forego foreign climes for a domestic break.

Here at LondonNet we’ve enjoyed increased hotel reservations for our featured London hotels this summer compared to last. However, the growth has been firmly at the value end of the market. Bookings for bed and breakfasts and budget hotels are doing well, for now at least, while the heady days of prestige hotels cranking up prices are coming to an end.

So the good news for the bargain hunting traveller is that as regular business wanes, hotels and other tourist firms will look to maintain occupancy by offering juicy discounts over the coming months. For tips on how to bag the best deals see our guide to capturing the best London hotel special offers.

Run to the Greenwich Beat