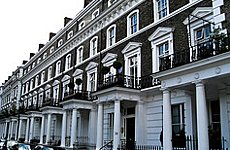 LONDON’S wealthy elite are in the middle of a property bonanza, while people in the rest of the country have seen the value of their homes crash.

That’s the message from a new survey of surveyors – the buildings type, not the ones who ask questions – whose findings back up recent reports from estate agents and the government’s Land Registry.

In London, says the Royal Chartered Institute of Surveyors in its latest three-monthly report, 14% more of its members think property prices are rising than think prices are falling.

By contrast, for the country as a whole, 29% more surveyors see prices falling than see them rising.

The bulk of that price increase in London comes thanks to sharp movements at the top end, where the multi-millionaire jet-set is still keen to invest and where the return of huge City bonuses has given them the means to do so.

“We are still experiencing a very high demand for freehold properties in central Kensington between £2 million and £7 million,” estate agent Kim Turner, of Bective Leslie Marsh, told The Telegraph.

“This demand is fuelled by a continuing lack of available properties and large numbers of serious international and local buyers who have been actively looking for a few months.”

Meanwhile, the Land Registry reported that there are now 19% more properties in the £1.5 million and £2 million bracket than there were just a year ago and the vast majority of them are in London.

London Ranked Top Vegetarian City in the World by Peta