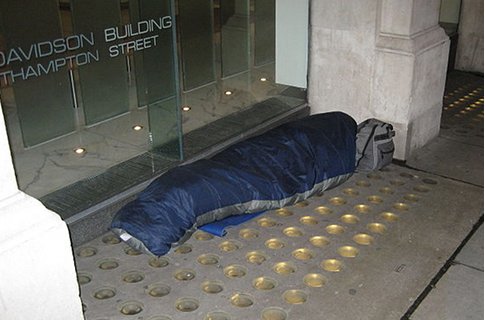 The number of rough sleepers on London’s streets has gone up by 13% in a year, a leading homelessness charity has found.

Of the 6,437 people sleeping rough in London in 2012 counted by the officially-backed Combined Homelessness and Information Network (CHAIN), the vast majority bedded down in central London, particularly in Westminster, where 2,442 rough sleepers were found.

Though the 13% increase from 2011 to 2012 was far smaller than the 42% increase seen between 2010 and 2011, rough sleeping has now almost doubled in four years, years which coincide with the government’s austerity programme of benefit cuts and which cover most of Boris Johnson’s reign as London Mayor.

“Boris Johnson made a very bold pledge in 2008 to end rough sleeping by the end of 2012,” said Tom Copley, Labour spokesperson on housing in the London Assembly.

“He reiterated that last year. Not only has he failed to hit the target but rough sleeping has increased every year that he’s been mayor.”

There has also been a large rise in general homelessness in London over the same period. Between 2011 and 2012, households defined as homeless by local councils increased by 30 percent, to 15,220.

“Now eight out of 10 new rough-sleepers only spend 24 hours on the street,” he said.

“That’s completely different to what we had before.”