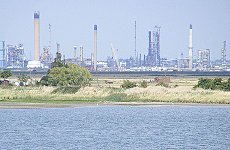 LONDON could run out of petrol in the wake of Britain’s biggest oil refinery filing for bankruptcy today.

The Coryton refinery in Essex is part of the Petroplus group, which was declared insolvent late yesterday and has now refused to send any tankers out on deliveries.

“Supplies across London and the south-east could be affected,” said Richard Howitt, MEP for the area which includes Coryton.

Coryton supplies about 20% of London’s fuel and unless a quick deal is sorted out for Petroplus, petrol supplies could be severely affected, possibly for many months ahead, and at least 1,000 jobs are under threat.

“I have been told this could impact on the Olympics,” Howitt warned.

On the plus side, the government has said it is “confident” that supplies into London won’t be affected and oil giant BP, Coryton’s biggest customer, says it is “entirely happy” with the situation.

Heathrow Queues: Airlines and Government Argue Over Who Should Pay for...

West End Theatres Took a Hit at the Box Office in...