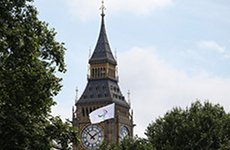 TRAFALGAR SQUARE took centre stage at the Paralympic Games this morning (24.08.12) when a giant cauldron was fired up by marathon hero Claire Lomas, who moves around on robot legs after a horse riding accident left her paralysed.

After Lomas had performed her duties, 26 Flame Ambassadors lit lanterns from the main flame to take around the country. All the old flames meet up next week ahead of the start of the Paralympics on Wednesday, when among the torch carriers through London will be boxing legend Michael Watson.

As well as all those flames, the Paralympics is being marked all over town by a changing of the flags from five-ring Olympic banners to those featuring the three-swoosh Agitos.

“After a fortnight of Olympics withdrawal symptoms, it’s time to dust off the GB flags and get ready for two more weeks of spectacular sport: the London Paralympic Games 2012 are finally here,” said the PM.

“Already this is shaping up to be the best, the biggest, the most incredible Paralympic Games ever.”

For once, that’s no politician hyperbole.

When 100,000 extra tickets to Paralympic events went on sale yesterday, they were sold within a few hours, pushing the total ticket sales figure to 2.3 million, a record for the Paralympics.

The flame’s early start this morning gives it time to go on a processional route around central London, taking in the Houses of Parliament and performers setting up for the weekend’s Notting Hill Carnival.

Usain Bolt Could be Powered by Pie and Mash at the...

Coldplay and Rihanna to Play Together at the BRITS