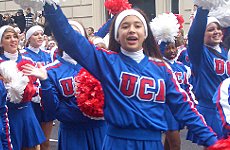 LONDON’S New Year’s day parade is to march in the opposite direction to usual this coming 1 January, to make the pictures on TV prettier for American viewers.

“We made the change to get even better camera angles for our multinational satellite transmission,” said Bob Bone, the man in charge of New Year’s parade 2010.

The new back-to-front route means that the juiciest sights of the parade, like the Houses of Parliament and The Mall, come nearer its end.

“Each year we act as a fantastic shop window for our city, but we wanted to make doubly sure that London looks at its very best,” said Bone.

Some 100M Americans watch the London New Year’s parade on TV, partly thanks to the time difference. It starts at 12 noon London time, which is 7am east coast USA time.

The other draw for the US audience is that the parade itself has a strong American flavour, complete with marching bands and pom pom girls; of the 9,000 performers, nearly half are American.

Turning the march to face the other way could also be said to reflect the origins of January itself, the month being named after the Roman god Janus, who had two faces pointing in opposite directions.