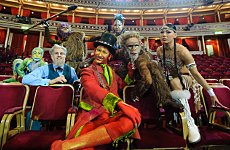 CIRQUE DU SOLEIL returns to London today with Totem, the show that “traces the fascinating journey of the human species from its original amphibian state to its ultimate desire to fly”.

The Royal Albert Hall is the venue and Cirque du Soleil are out to employ its cavernous spaces to the maximum extent, combining spectacular acrobatics and atmospheric theatrical techniques to re-tell human origin myths.

Tens of thousands saw an earlier incarnation of Totem in London last year and, over the years, at least 1.5 million people in Britain have seen Cirque du Soleil shows of one type or another.

With that kind of fanbase, tickets for Totem are already selling fast, but can still be obtained from LondonNet’s squirrelled-away allocation here.

The Cirque du Soleil’s Totem at the Royal Albert hall runs from today, 5 January until 16 February.

Don’t forget our New Year Theatre Ticket sale is now on. Get up to 60% off leading West End theatre shows.