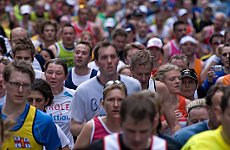 LONDON MARATHON fund raising is set to run through the £500M barrier this Sunday, on the event’s 30th birthday.

Over the years since the first London Marathon in 1981, charitable donations have gone up and up hand in hand with the rise in the number of runners.

With 36,000 participants coining an expected £50M+ in this Sunday’s race, the rolling total is almost certain to go past £500M.

“We provide our runners with an opportunity to raise huge amounts for good causes each year,” said race director David Bedford.

“We will be delighted when the total raised for charity reaches half a billion pounds in our 30th year.”

The marathon is famous for combining amateur runners who realize just how long London’s streets can seem when they’re doing twenty odd miles by foot; competitive champions out to be first to arrive at The Mall finish line; and daft people shuffling along in fancy dress costumes – all being cheered by hundreds of thousands of Londoners.

“The essence of the London Marathon is the way it combines elite fields and the community runner, the fund-raiser and the person who simply wants to complete the race, because it is something they have to do,” said former Olympic champion Sebastian Coe.

Loads more on the marathon at the official site.

Brixton Launches Its Very Own Currency