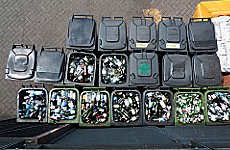 LONDON is rubbish at sorting out rubbish, according to a new pan-European report, which says we stick more of our waste on landfill sites than any other of the continent’s big cities.

Though the government has pushed councils to recycle more in recent years, London still dumps 52% of its rubbish – or 2.2 million tonnes – on landfills while recycling 22% and burning the rest.

Some European cities have recycling rates at least double London’s and many bin far less stuff in the first place, says the survey from Suez
Environment, a French waste management company.

On average, Londoners chuck away 520 kilos of rubbish per year, compared to 420 kilos for Copenhagen, a teacher’s pet city that comes out well in the report in general.

But we’re not quite so bad for rubbish-chucking as we are at landfill-abusing; whereas London comes bottom of the 25 city survey in the landfill charts, it manages a relegation-beating fifth from bottom for throwing things away.