MENUMENU
Home London News Is it the end of the traditional English breakfast? 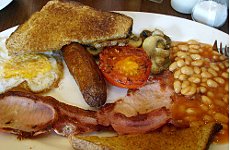 The poll of 4,000 UK parents, carried out to mark the start of British Egg Week, found that the quarter of an hour dedicated to breakfast 20 years ago has now halved.

The research also discovered that families now shun the traditional sit-down breakfast with just a quarter eating the meal at the table, compared to almost half (49 per cent) 20 years ago.

Of those surveyed 26 per cent now sit in front of the TV with their breakfast on their lap.

Not eating a proper breakfast means 45 per cent of Brits end up having a snack mid-morning, with crisps and biscuits the most popular choices.

A spokesman for British Lion eggs, which carried out the study, said: “Increasingly busy lifestyles are impacting on families eating a proper breakfast which is vital for energy levels and concentration.”

“Eating a nutritious breakfast is essential, and it is well worth getting up ten minutes earlier each morning to make sure you have time for a decent meal to keep you going throughout the day.

“Not only will it keep your energy levels up so you are at your best while you are at work but it will stop you snacking on high fat foods.”

“Eggs are especially good at controlling the urge for a snack as research shows they help to keep you feeling fuller for longer.”

The poll revealed that a lack of time could be the reason for no longer eating breakfast as a family as Brits today spend almost 19 minutes showering, getting dressed and doing their hair.

On top of that, another 15 minutes is spent making lunches and getting children ready to leave the house, leaving little time left to eat.

There is another way of course. Have some time out and let someone do the hard work for you and take a break at a traditional London Bed and Breakfast.