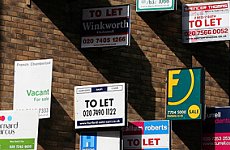 THERE ARE growing signs that house price falls in London may have ended.

A series of surveys from the nations leading indices of house prices show that prices began to steady in the Spring and have begun to creep back up in the Summer.

According to figures released by the Nationwide building society today, prices are now 1.3% higher than at the start of the year. Yesterday the Bank of England said the number of mortgages approved for house buyers rose for the fifth month in a row. That came with news that the Land Registry’s record of actual completed sales showed prices rising for the first time in June.

Prime London property is once again leading the way, with reports from leading agents such as Savills pointing to increased foreign interest. This is thanks in part to the weak pound and is centred around hotspots such as Chelsea, Notting Hill and Mayfair.

However, as we reported earlier this month some experts are more cautious. They point to the seasonal bounce that the Spring/Summer period often brings to prices and warn that unemployment is still increasing, with further rises of as high as 50 per cent predicted by some.