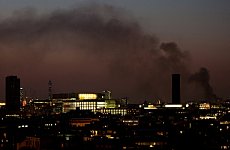 LONDON Fire Brigade investigators will today trawl through the remains of the site of yesterday’s huge fire in Chancery Lane that nearly destroyed the home of the Immigration and Appeals Commission.

There has already been confirmation that firefighters found three propane gas cylinders on the roof of Field House, in London’s legal district, and it is known that work involving bitumen was being done on the roof.

The fire began in mid-afternoon and spread from the roof down to some of the floors below.

All 130 people working in the office block were evacuated safely and the fire itself was brought under control by 75 firefighters later in the evening.

Immigration hearings due to take place at Field House have been cancelled, though there is no truth in the shameful rumour that Boris ‘Amnesty for Immigrants’ Johnson was seen leaving yesterday’s scene with a box of matches.

The Chancery Lane fire took place only a stone’s throw away from the 1666’s legendary Great Fire of London, which was at its height on the 3rd of September. If you write that digitally, you get 3/9, which adds up to 12; the same result when adding up yesterday’s date; 1+8+3. Spooky.

What do you reckon is to blame for the fire? Gas cylinders, bitumen, Boris Johnson, the number curse, or the credit crunch?