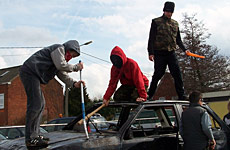 KEN LIVINGSTONE has reacted to falling poll numbers by promising a raft of measures to tackle youth crime.

“It’s all about getting kids off the streets,” said London’s current mayor, speaking today. “We’re building new youth clubs and expanding existing ones and there will be 52 new evening sports clubs.

“We are putting in a once-in-a-generation investment to give children and teenagers in London the chance to get involved in sport, music and skills training activities and the chance to share in capital’s success.”

The mayor said his pledges would cost UKP75 million.

In the run up to the 1 May election, Livingstone’s main opponent, Tory candidate Boris Johnson, has made youth crime his main angle of attack and the most recent poll numbers appear to show this tactic has had some effect,

Livingstone can take some comfort from the fact that Johnson’s own numbers have not gone up since the last YouGov poll. Instead, Paddick has added five points to his previous tally and Livingstone has lost five. The mayor also claims that his own polling suggests he still leads.