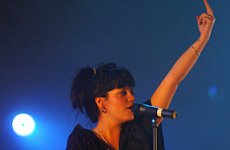 LILY ALLEN is back on Twitter after a four month break.

“hello, I’m back,” was the Smile singer’s simple message to announce her return to the social networking site, on which she has nearly two million followers.

Intriguingly, Allen goes on to say she has, “got some really exciting stuff to share with you”, which will fuel rumours that she’s pregnant. Recently, she told one crowd in Australia that she wanted to have kids.

On the other hand, the exciting news might be more prosaic than that, as Lily tells us that she is, “Setting up my new office in London”.

“I am a neo-luddite, goodbye,” were her last tweeted words before today.

After announcing the comeback, Allen made reference to her recent globe trotting.

“Just got back from aus, and I had a wonderful time,” she said, also revealing that she, “Went to india over xmas.

The fat content of the food on the latter trip has apparently, “made its way from my tummy to my thighs”.

One coda to today’s historic news is that it has been known for hackers to break into Twitter accounts.

Paris Hilton to Join Amy Childs for UK Version of A...