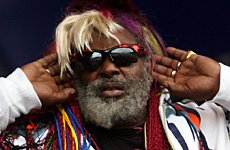 MELTDOWN has arrived on the South Bank and there are still tickets left for some of the most interesting shows likely to hit London this year.

Overseen by Massive Attack, the 2008 version of the annual event has brought in some of the most vital acts in music history. There’s hugely influential American rockers MC5, legendary funk god George Clinton (pictured) and punk/dance pioneers Primal Scream for three and plenty more besides.

Massive Attack themselves kick off this weekend’s festivities with a Saturday night show that is reported to include a selection of the band’s tunes from throughout their genre-busting career.

There’s not just music on offer either. Visual arts, movies and a silent disco get a look in, but you can’t help coming back to those big names like the Gang of Four, the Tom Tom Club and Stiff Little Fingers to name just three more. Meltdown runs until 24 June.