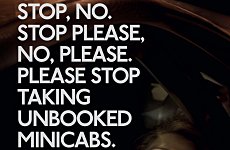 As New Year’s Eve approaches, the Mayor, Transport for London, the Metropolitan Police Service (MPS) and the City of London Police (CoLP) revew their warning about the dangers of using unbooked minicabs.

The campaign is part of the Mayor’s Safer Travel at Night initiative. Since it was launched six years ago the number of women willing to take illegal cabs has dropped by almost 80 per cent, while the number of cab related sexual offences has almost halved. However a small but significant number of younger women continue to use illegal cabs despite the dangers they pose.

The Mayor of London, Boris Johnson, said: “London is one of the safest big cities in the world but it is hugely important that everyone takes this message on board – minicabs that haven’t been booked are illegal and a threat to your personal safety. Don’t take the risk and don’t let your friends do it either. Save the Cabwise text number, 60835, in your phone and use it.”

Jenny Fawson, Director of Personal Safety for Suzy Lamplugh Trust said: “Suzy Lamplugh Trust has long campaigned to warn people of the dangers of using illegal cabs. These are illegal, uninsured and potentially very dangerous. Many people who have used unbooked minicabs have been victims of crimes such as theft, assault and rape. Suzy Lamplugh Trust supports the Mayor and TfL in urging late night travellers to make personal safety their top priority this Christmas party season.”

Steve Burton, TfL’s Director of Community Safety, Enforcement and Policing, said: “Revellers should be aware that only black cabs can be stopped and picked up off the street without being booked. Illegal cabs put people, particularly women, at risk of sexual attack and by booking your minicab you’ll ensure a record of your trip is kept and in the event of any problems the driver will be traced.

“Minicab drivers that approach Londoners anywhere in the Capital touting for business pose a real danger to late night travellers. Our Cab Enforcement Unit’s dedicated anti-touting initiatives will help reduce crime in the run up to Christmas.”

It is illegal for any minicab, even if they hold a TfL licence, to tout for business on the street or to carry out a journey that has not been booked through a licensed operator. Booking guarantees that your trip will be with a licensed driver in a licensed vehicle. It also means that a record of your journey, your driver and vehicle will be kept so in the event of any problems the driver can be traced. Only licensed taxis (black cabs) can be hailed in the street or picked up at a rank without a booking.

The Safer Travel at Night initiative is a partnership between Transport for London (TfL), the Metropolitan Police Service (MPS) and the City of London Police (CoLP). It aims to make people travelling at night, in particular women, aware of the dangers of picking up unbooked minicabs off the street, as well as informing them of the best ways to get home safely.

– Night buses
There are now more night buses available than ever with 114 routes (Information relevant for 2am on Saturday morning – correct as at October 2009) running through the night and all are fitted with CCTV cameras. For help finding your night bus home call the 24 hour London Travel Information line on 020 7222 1234.

– Cabwise
A text service which provides two minicab numbers and one taxi (black cab) number of cab firms in the area you are in by texting ‘CAB’ to 60835. Texts are charged at 35p per enquiry plus standard text message rate. Roaming rates apply to overseas networks. Customers on the 3 network need to enter different information. See www.tfl.gov.uk/cabwise for further details.