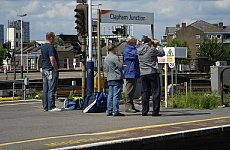 CLAPHAM JUNCTION is rated the second worst station in the land, escaping the ultimate insult only thanks to the state of Manchester Victoria, which came bottom in a list compiled by the government’s Station Champions.

Long the bane of many commuters’ travel-life, Clapham Junction was slammed in the report for its dirtiness, the difficulty of changing between its many platforms and the problems it causes disabled and elderly passengers.

The good news is that the government now plans to invest £50M in the country’s ten worst stations to bring them up to scratch.

“More needs to be done to improve conditions and services for passengers at stations,” said Transport Secretary Lord Adonis.

“I want every station to be a good station – a hub of local community life and somewhere that you wouldn’t mind spending time, with adequate facilities.”

Another slice of good transport news is that Oyster cards will soon be usable on London’s overground network by early next year.

Is it the end of the traditional English breakfast?