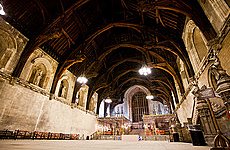 WEDDINGS could become a regular event at the Houses of Parliament, after an influential group of MPs backed plans to turn a profit from the famous seat of democracy.

Westminster Hall, one of the oldest parts of the Parliament complex, has been earmarked by the Commons Administration Committee as a money-spinning wedding venue and is expected to pull in at least £100,000 a year for the government’s coffers.

“From the point of view of both revenue and wider public access to a national asset, we support the idea of hiring out Westminster Hall,” said a report published today by the committee.

Despite the cash-cow imperative, certain standards would have to be keep by those hiring out the hall.

“We would not want to have anything that is inappropriate,” said committee chairman Sir Alan Hazelhurst, Tory MP for Saffron Walden.

That might be bad news for guests planning to wear one of those Star Wars-style hats sported by Princess Eugenie at Will and Kate’s do, but on the plus side, if you invite a nearby MP to the reception, they can probably put the the whole thing on expenses.

Rules of “inappropriateness” are likely to be looser at another revenue-raising spot identified by the committee – the House of Commons’ riverside tea terrace.

“Allowing public access to the Terrace Pavilion for an afternoon tea service for those who have taken tours would raise revenue for the House,” said the report.

Both schemes would only apply when Parliament was in recess, said the report.