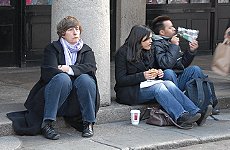 HI-TECH denim jeans that use nanotechnology to stop air pollution are to go on show at the London Design Festival, which starts later this week.

Given recent reports that show London’s air to be among the filthiest in Europe, a clothing solution could be just up London’s street. Especially if that street is Oxford Street or any other area with a high number of pedestrians.

“A significant reduction in the level of air borne pollutants in a large city such as London could be achieved if, for every metre of pavement width, 30 people wearing Catalytic Clothes walked past each minute,” say developers Catalytic Clothing.

The jeans, or any other clothing fitted with the new technology, “harness the power of a photocatalyst to break down air borne pollutants,” by using light as an energy source.

“When the light shines on the photocatalyst, the electrons in the material are rearranged and they become more reactive,” adds the Catalytic Clothing website.

Further reactions then “cause pollutants to break down into non-harmful chemicals”.

Any material can become a pollution eater with the addition of a sort-of conditioner containing the photocatalysts, but different materials need different catalyst set-ups.

For the purposes of demonstration, jeans fit the bill since, “there are more pairs of jeans in existence than there are people on the earth,” as the Catalytic Clothing people put it.

The nanotech denim – developed by a team at Sheffield University and another at the London College of Fashion – has been formed into a display called The Field of Jeans for the London Design Festival, which runs from 17-25 September.