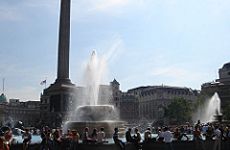 WITH TEMPERATUES rising to the late 20°s Celsius in London this week, it seems that sunnier times may have returned to the capital’s tourism and hospitality industry.

Despite the austere economic measures taken by the Coalition Government following the 2007-2008 credit crunch, London’s hoteliers are leading the way out of recession says a new report by TRI Hospitality Consulting suggesting London hoteliers profits are now well ahead of pre-recession performance levels.

Two key industry metrics show double digit growth for June 2011, first the Gross Operating Profit per Available Room (GOPPAR) of increased 17.6% to £94.12 from £80.02 and second a 15.1% increase in Revenue per Available Room (RevPAR) to £132.05. These rates show that June was the 19th successive month of growth in profitability. Encouragingly, the rate of growth in profit appears to be quickening, with June’s GOPPAR increase being at the highest rate since September 2010.

“London hoteliers seem to be infallible at the moment” said Jonathan Langston, Managing Director of TRI Hospitality Consulting. “They have now convincingly shrugged off the recession to hit new heights.”

However this growth has in part been funded by a big squeeze on payroll figures. So while there’s been a 12.6% in average room rates over the 12 months to June, payroll levels as a percentage of total revenue at London hotels are 0.6 percentage points below the same period last year. While this has been good for hoteliers’ profits, it does indicate that pay rates have been squeezed alongside payroll numbers.

Nevertheless the London accommodation sector, be it swanky luxury hotels or more humble family orientated bed and breakfasts, is a bellwether for the wider tourism and business hospitality portion of the country’s all important service industry.

“Whilst the ONS has reported another quarter of limited economic growth in the UK, the growth in revenue and profitability at London hotels has been leveraged by the multi-national origin of both business and leisure visitors to the capital. Added to which, the packed summer season of events in the city continued with accommodation demand derived from major events including Wimbledon, Hard Rock Calling, Taste of London and Royal Ascot,” said TRI’s Langston.

London’s tourism industry is also thought to have benefitted from world-wide exposure following April’s Royal Wedding. Indeed one of the holiday season’s key draws is Kate Middleton’s wedding dress on display to the public in the new Duchess of Cambridge’s in-laws home, Buckingham Palace.

All of this optimism comes before the London 2012 Olympic Games next year which are expected to be a huge, albeit one-off, profit opportunity for the capital’s hotel industry.