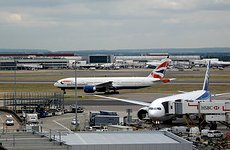 HEATHROW expansion is back on the agenda after Prime Minister David Cameron hinted he is ready to allow a third runway at London’s main airport.

Quizzed on the issue in the House of Commons yesterday, Cameron appeared to soften his government’s previous anti- position when he failed to rule out a third runway.

“We must not be blind to two important considerations: how we expand airport capacity overall and how we ensure Heathrow operates better,” said the Prime Minister.

Government insiders told the Financial Times that both the PM and Chancellor George Osbourne now have a “open mind” on the third runway, which is opposed by many in the pair’s own Tory party, including London Mayor Boris Johnson.

Johnson is famously in favour of a completely new airport in the Thames Estuary, but it looks like the far higher cost of the ‘Boris Island’ project has pushed the government back towards the Heathrow expansion option.

A new Thames Estuary airport would cost upwards of £20 billion – some estimates say £50 billion – while a third runway at Heathrow is reckoned to come in at £10 billion.

The Heathrow scheme would also be ready much earlier – within five-ten years – while the Thames estuary project wouldn’t be up and running until 2028, and that’s according to one of its main backers, architect Sir Norman Foster.