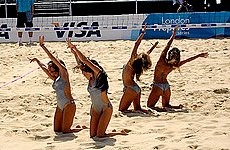 THE GOVERMENT has spent £750,000 on London Olympics tickets, many of them to be used to butter up friends in the international jet-set.

“We want to give investors the royal treatment,” admitted Jeremy Hunt, Secretary of State for the Department for Culture, Media & Sport.

Hunt came under pressure earlier this year when nearly two-thirds of ordinary applicants failed to get any London Olympic tickets.

Details of the 2012 Games ticket bonanza for the world’s mega-rich were only uncovered after a Freedom of Information request on the matter was put in by Sky News.

Out of 6,000 tickets bought by the government, it appears that over half (3,100) are to be doled out as freebies to the global business elite.

“Tickets will be used to invite and accompany a number of international and domestic political and business leaders,” a DCMS spokesperson confirmed.

Another 3,000 tickets are to go to civil servants who have worked on the Games, though these will be paid for by the individuals concerned. 450 free tickets have been set aside for school children.

A large part, £265,000, of the £750,000 spent on Olympics tickets has gone on tickets for the opening and closing ceremonies, while the event with the most tickets, 411, set aside for the state and its rich friends is the beach volleyball on Horseguards parade. Next most numerous comes athletics with 257 tickets, then track cycling with 224.