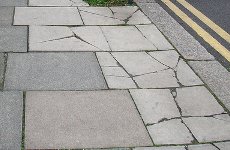 A SOHO MAN has been charged with fraud after suing a total of eight London councils over a period of just 17 months.

Nathan Williams, 38, who lives in a half a million pound flat on Dean Street, Soho, made claims against the local authorities for a series of alleged falls on broken and poorly maintained pavements across the capital. Working alongside council officials, police officers linked the claims and have now charged him with fraud. Today, City of Westminster Magistrates’ Court remanded him in custody to next appear on 1 September 2010.

‘Accident prone’ Williams submitted claims for falls in Hackney, Haringay, Lewisham, Soho, Wandsworth, Tower Hamlets, Elephant and Castle and Greenwich, with a variety of injuries including a fractured hip, a broken ankle and a bruised testicle. He would have been in line for hundreds of thousands of pounds in compensation had he been successful.

The Police are Revolting

Piccadilly Circus to Beam Out Poetry ‘That Lights the Sun’