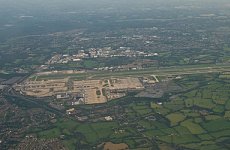 Gatwick’s owners unveiled their plans for London’s airport future today, arguing for what they call a “constellation” approach to air travel to and from the capital.

In contrast to rival mega-hub schemes at Heathrow, Stansted and the London Mayor’s ‘Boris Island’ – all of which have already been put to the government’s Airports Commission – Gatwick favours competition between existing airports and wants to build a second runway to be able to raise its own game.

“London is the best connected city in the world today because the UK’s aviation industry is one of the most competitive and innovative,” said Stewart Wingate, London Gatwick Chief Executive.

“Our proposal to the Airports Commission builds on this foundation.”

“Our evidence shows clearly that an additional runway at Gatwick would best serve the needs of all passengers, and give certainty to airlines, communities and businesses.

“A two-runway Gatwick, as part of a constellation of three major airports surrounding London, will also provide flexibility in an industry where the only constant is change.”

In Gatwick’s favour is the cost of its expansion: at £9 billion, it is cheaper than a revamp of Stansted, which has a £10 billion price tag, a third runway for Heathrow (£14 billion) and Boris Island (£50 billion). Unlike others, it also enjoys the backing of its local council.

Read the whole of Gatwick’s “vision for the future” here.

Kate Moss: Being ‘Beautiful Inside’ is What Counts

Chelsea Flower Show celebrates its 100th birthday – The Queen and...