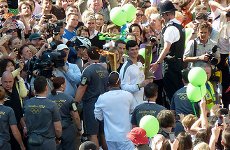 FACEBOOK has joined the London Olympic team with the launch of Explore London 2012, a new tool designed to let athletes and fans “share their stories with the world”.

Famous sports names like Jessica Ennis, Sir Chris Hoy and Theo Walcott are all featured on the main page of Explore London 2012 – all you have to do is click on their links to take part in the many conversations facebook hope will be sparked off by events at the Olympics.

“These Olympics, every story has the potential to be heard. On facebook, all athletes can have an audience and every fan can track how their heroes are doing, support them, encourage them, and share their stories with the world.”

Facebook’s entry into the Olympics has been given the official seal of approval.

“I’m sure that through facebook and all of our other social media channels we will manage to bring a new dimension to the Games for a new audience,” said Mark Adams of the International Olympic Committee.

“The Olympics has been connecting fans with memorable sporting events and moments for more than a century; first in the stadiums, then through television and now on social media.

“It makes sense to give fans the best experience we can and these will be the first truly ‘social’ Games.”

Follow LondonNet on facebook here, where we’d love to see readers’ pictures on anything to do with the 2012 games, the odder the better.

London Rated Most Expensive Car-Parking City in the World