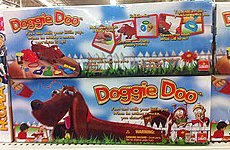 A GAME in which players win by cleaning up dog poo has emerged as one of the likely/unlikely top toy sellers this Christmas, according to the Toy Retail Association, which held its annual pre-Christmas meeting in Marylebone today.

Last year, Doggie Doo was nominated for the prestigious Toy of the Year title in the Netherlands and this year hopes to go one better in the UK, where the TRA have now included the messy game in its top 12 seasonal sellers chart.

You can see how efficiently the toy’s bowel mechanism works here, when Doggie Doo was a star guest on the Jonathan Ross show last month.

Unlike many of the toys on the list, Doggie Doo doesn’t have hi-tech help. The LeapPad Explorer, also on the top 12 list, is a kind of kids’ tablet PC, for example.

Nor is Doggie Doo reliant on previous media exposure, as with TV tie-in toys like the Fireman Sam Pontypandy Rescue Set and Let’s Rock Elmo. In fact, you could say that Doggie Doo doesn’t give a sh** about all that.

That Christmas Toy Top Ten (as Predicted by the TRA) in Full: