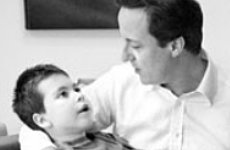 The news was released in a Conservative Party statement this morning, as Tory boss Cameron and his wife Samantha mourn their loss in private.

“It is with great sadness that David and Samantha Cameron must confirm the death of their six-year-old son Ivan,” the statement runs.

“Ivan, who suffered from cerebral palsy and severe epilepsy, was taken ill overnight and died at St Mary’s Hospital, Paddington, early this morning.”

Prime Minister Gordon Brown, whose own daughter died 10 days old, was among the first to express his sympathies.

“The death of a child is a loss no parent should have to bear,” said Brown.

“I know Ivan was a child who brought joy to all those who knew him and his was a life surrounded by love. The thoughts and prayers of the whole country are with David, Samantha and their family.”