A day that ended with a portly fellow, naked except for the glittery silver design on his back, putting on an impromptu show at Beach Blanket Babylon was a bit strange all the way through. Central St Martins graduate Mark Fast started the morning with a collection of spiderweb-weave knitwear mini dresses with a thunderstorm soundtrack that made me want to curl up back in bed (though not because the looks were boring). He was followed by fellow Topshop New Gen honoree Mary Katrantzou, whose frocks looked as if they had multi-hued perfume bottles printed across the front.

Just a few seats down from my front-row spot at Ashley Isham‘s show in the Science Museum sat Erin O’Connor, Tess Daly and Jasmine Guinness. I hope they admired the strong points of the collection, which included an all-over jewel-encrusted dress and a full-length, draped silk-jersey number. Moving on from there, Peter Pilotto dazzled with a big-bang inspired set of quirky print dressses that had buyers from some of London’s biggest stores clamoring for orders.

I’d tell you how Bora Aksu was, but a ‘guerrilla’ fashion show (styled in part by Dazed & Confused Fashion Editor Katie Shillingford) ran late by about an hour at Vauxhall Fashion Scout, and by the time I popped back to the Science Musem I was discouraged by the queue and the rumours that a venue that seats 300 had been oversubscribed by about 400 tickets. This sounded like lots of waiting, with a possibility of later cramming myself in a crowded space (it’s that nasty claustrophobia, you know) and letting people with large bags bump into me. I settled for a sandwich at Pret.

Emma Bell, also at Vauxhall, was one of the most entertaining scenes of the season. Known for her over-the-top party wear and the occasional drag look, she has some of the most supportive and longest-eyelashed fans I’ve seen. Plus, her show had the best music, and she served cupcakes with glitter sugar and silver hearts on top. (Outsider Tart, you kind of made my stomach hurt and probably have rotted half my teeth, but it was nice to get to eat again.) The most entertaining looks at Emma Bell, besides obviously those worn by Big Brother twins Sam and Amanda and Jodie Harsh, were those that covered the necessary bits with chainlink gingerbread men.

Henry Holland and Aggy Dean got a fair share of applause at House of Holland, which saw models walk out in colour-blocked looks resembling the paint swatches people normally only see at home-improvement stores. Can we expect to see MIA in something like that at the next Grammys?

Finally, House of Blue Eyes (by Johnny Blue Eyes, who’s styled the Klaxons and The Gossip) showed at Beach Blanket Babylon, and let’s just say there were lots of feather fans waving and not much more clothing than necessary. That pretty much set the scene for later, when Mr Glitter put on his graceful performance. 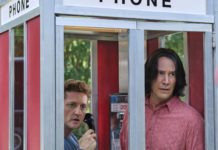 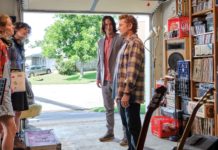 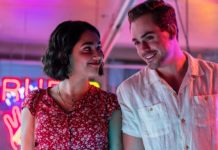