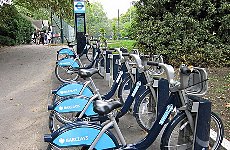 BIKES are riding high over London at the double. First, there’s the news that one million journeys have been made with Transport for London’s new bike hire scheme and second, Earls Court hosts the annual London Cycle Show this weekend.

“A million ‘thank yous’ go to Londoners for the warmth with which they have embraced our beautiful blue bikes,” said London Mayor Boris Johnson in response to hitting the million mark.

As well as the million+ journeys, TfL report that nearly 100,000 people have become members of the bike hire programme.

Probably some of that lot will head for Earls Court this weekend for the Cycle Show.

There they’ll be able to clock 2011 product launches from top brands, try out the show’s purpose-built mountain bike track, watch stunt bike performers in a Street Jam and pluck up the courage to go for an indoor triathlon involving rowing, running and, obviously, cycling.

The Cycle Show at Earls Court runs from Friday 8-Sunday10 October. On Friday and Saturday it’s open between 10am-6pm and Sunday from 10am-5pm.

Adults pay £15 on the door, under-14s £7.50 and under-5s get in free. There are concessions for group bookings and for booking ahead of time online .

Sport the Winner of the London Marathon