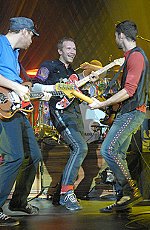 Coldplay have bought an old bakery.

The band think the “ugly” building, in Primrose Hill, is the perfect place for their new headquarters away from fans and paparazzi.

Singer Chris Martin explained: “For years I used to walk past this building everyday and think, ‘What an ugly place.’

“Then one day a To Let sign appeared outside. I thought, ‘Hmmm that place is so ugly, I bet no one would bother us if we move in there.’”

It will be the band’s first ‘home’ together since their university days, and they plan to be based there while promoting their new album, Viva La Vida Or Death And All His Friends.

The LP, the follow-up to 2005’s X and Y has had its release date brought forward and will now hit shops across the world on June 12.

Coldplay have announced they will play two free shows, in New York and London, to support the album’s release. Fans must keep checking the band’s website to find out how to attend.

Day of the Bikes Looms