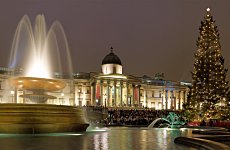 THE COUNTDOWN to Christmas begins officially for Londoners tonight, with the ceremonial lighting of the tree in Trafalgar Square.

Since 1947, the people of Norway have given us a Christmas tree as a thank you for Britain‘s support during World War II. In 1940, when the Germans overran Norway, its King Haakon VII fled to Britain.

While in exile in London, he set up a government and planned his return to Norway once the war was over. In 1947, two days before Christmas, the first Christmas tree was presented.

The 61st tree will be lit tonight by the Mayor of Oslo and the Lord Mayor of Westminster. The Norwegian spruce is over 20 metres high and over fifty years old. It was carefully selected years back from the forests surrounding Oslo. The Norwegian foresters who cared for the tree affectionately call her ‘the queen of the forest’.

In 1947 it took four days to dig a 6ft hole in the middle of Trafalgar Square to anchor the tree. Today, a hydraulic crane is used and the tree is secured with a socket and clamp. The tree will be dressed in traditional Norwegian style, and lit with 500 lamps.

In 1960 Westminster City Council wanted to ask Norway to pay for the electricity bill but Parliament stepped in. In 1980 the council tried to stop the tradition altogether to save the UKP5,000 cost. This year, energy efficient bulbs will be used.

The tree will remain in Trafalgar Square until 4 January, just before the Twelfth Night of Christmas, when it will be taken down and recycled.

Gatwick Goes for Second Runway by the 2020s