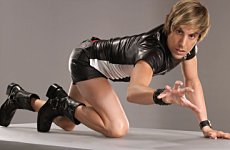 BRUNO gets its Leicester Square premiere tonight, with a big crowd expected, there to find out what the film’s creator, Sacha Baron Cohen has up his designer sleeve.

A few weeks ago, Baron Cohen came up with a stonker of a publicity stunt when Bruno, dressed as an angel, plopped down on Eminem at an MTV award show and shoved his bum into the rapper’s face.

Rumours suggest that tonight, at the very least, Bruno/Baron Cohen will give an in-character speech to the crowd.

For a flavour of what might be unleashed try this, a quote from a Bruno interview with GQ magazine:

The film itself is a mockumentary like Baron Cohen’s phenomenally successful Borat, with a similar scatter-gun approach to its targets for satire, among them the pretensions of the fashion industry.

Arsene Wenger Up for Best French-Type Person in London Award

Dog Poo Collecting to be This Year’s Christmas Family Game