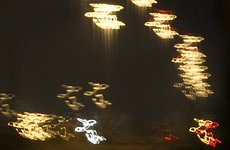 BROMLEY, south east London, was chosen by aliens as the site of an abortive invasion in 2003, according to reports contained in ‘X Files’ released by the government today.

Several witnesses say they saw a fleet of 20-30 UFOs zig-zagging over the south east London suburb and one family filmed the historic event before calling in the authorities.

“A policeman sent to investigate confirmed the sighting,” reads the Ministry of Defence document on the case.

“Objects were moving faster than any man-made aircraft.”

For some mysterious reason, the would-be invaders turned tail, possibility due to the traffic on the A222. Bromley isn’t the obvious place for interstellar intrigue, but it is worth noting David ‘The Man Who Fell to Earth’ Bowie lived their once and he had a hit song about a lonely spaceman.

Just five years before the Bromley incident, a man in Barnes reported that he had been abducted by aliens when he seemed to have “lost an hour” of his life following the appearance of a “cigar-shaped vehicle” in the autumn sky.

The Ministry of Defence informed the man that clocks had gone back that night.

Also revealed by the release of UFO material under the Freedom of Information Act is evidence aliens were discussed at the highest levels of government.

In the 1970s there was talk of forming a UN agency to look at UFOs and the House of Lords held a debate on the issue.

You can look at the files on the government’s national archives site.

London Gears Up For Music Weekend

Gaddafi Squatters Tell Other Dictators’ Their London Property Will Be Next