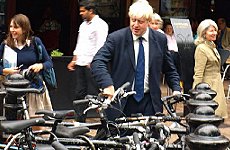 BORIS JOHNSON plans to build a monorail for bikes in the London Olympic park.

“I have ideas for what I call The Fly.”

The Fly consists of pedal-powered pods that hang down from a monorail track and seems to be based on the Schweeb, a similar bike-monorail project already up and running in New Zealand and part-funded by Google.

Thanks to the aerodynamics of the pod and less resistance encountered by the Schweeb/Fly’s wheels, designers reckon pedalling at 20 kilometres per hour takes about a third as much effort as walking at 5kph, which is normal walking speed.

Johnson’s adoption of the scheme has yet to be given the official go-ahead by Olympic bean counters, but with the Mayor’s backing, there is a fair chance we could be riding around the east London skies in time for the Games in 2012.